They gathered long distance via Zoom, garlanded with pearls in homage to Kamala Harris's signature neckwear, and with champagne bottles ready to pop.

Eight Black women, who for the past 25 years have belonged to what they call the Brown Girls Book Club, could not miss the opportunity to join together for this historic moment: the inauguration of Joe Biden and Kamala Harris, who becomes the first woman, first African American, and first Asian American vice president.

"I need this moment for me," said Vivian Wallace-Llodra, 50, a senior content strategist with JP Morgan Chase in New York, who sported a T-shirt reading "Kamala and Joe" (because "first, her!" she explained) and a cobalt blue pantsuit in tribute to Hillary Clinton.

"What's that song, 'It's been a long time coming?' " Wallace-Llodra asked. "Change gonna come! " chimed in Rachel Giordani, 49, an instructional coach in New York, proudly decked out in a red Howard University sweatshirt.

Many of those in the group are alumnae of Howard, Harris's alma mater, or fellow members of her sorority, Alpha Kappa Alpha, and they felt a special connection to this day.

As they waited for the ceremony to begin, the women said the joy they felt was shaded by the damage done during the Trump presidency.

"I feel like today and in the days that are coming, we're all going to be recovering from PTSD," said Wallace-Llodra. "Joe Biden and Kamala Harris is a return to normalcy."

The group turned euphoric when former first lady Michelle Obama appeared on the stage in a belted burgundy ensemble, her hair in a sleek, wavy blowout. "Go ahead, Michelle!" they shouted. "Look at Shelly!" "Today we fierce!" "That's a helluva belt buckle!" "Forget it, she snacks from head to toe!"

When Harris emerged from the Capitol in a royal purple coat and matching dress, the women erupted in jubilant cheers, which quickly turned to sobs as they absorbed the weight of the moment. "Oh my god," they said, wiping away tears. "Wow."

Monica Brady, 49, a middle school principal in New York City, called the new vice president "a kick-ass woman who would very easily fit in this set ... [We] see us reflected back to us, not just in her brownness, but her fierceness. She is a fierce woman! And everybody on this line is as well."

After Harris and Biden were sworn in, the women whooped and raised their glasses high in a toast, some with champagne, others with sparkling water and iced coffee. "I love you guys," Giordani told her friends, before adding, "We have a lot of work to do."

The women sipped as they listened to President Biden speak of unity and healing in his inaugural address, urging Americans to "hear one another, see one another, show respect to one another."

Afterward, reflecting on his words, Wallace-Llodra said, "I know a lot of people are a little offended by these calls for unity. I'm not, you know? Unify. Embrace them. They'll either come along or they won't."

She added, "Now personally, the cynic in me thinks that they won't come along because they haven't. But there's nothing wrong with trying." 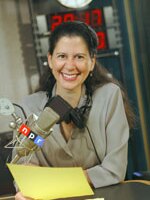 Melissa Block
Melissa Block is a 28-year veteran of NPR and has been hosting All Things Considered since 2003, after nearly a decade as an NPR correspondent. Frequently reporting from communities in the center of the news, Block was in Chengdu, China, preparing for a weeklong broadcast when a massive earthquake struck the region in May 2008. Immediately following the quake, Block, along with co-host Robert Siegel and their production team, traveled throughout Sichuan province to report extensively on the destruction and relief efforts. Their riveting coverage aired across all of NPR's programs and was carried on major news organizations around the world. In addition, the reporting was recognized with the industry's top honors including a Peabody Award, a duPont-Columbia Award, a National Headliner Award and the Society of Professional Journalists' Sigma Delta Chi Award.
See stories by Melissa Block

Melissa Block
As special correspondent and guest host of NPR's news programs, Melissa Block brings her signature combination of warmth and incisive reporting. Her work over the decades has earned her journalism's highest honors, and has made her one of NPR's most familiar and beloved voices.