Sean Campos was three years old when he sang his first song onstage.

“It was My Prayer by The Platters was the very first song I ever learned.”

His parents immigrated to America in the late 60s, part of a Top 40, Funk, Soul band, they allowed Sean to join in, but with a warning.

“And they were like, son, it’s really not the best way to want to make a living. And, so, like, I couldn’t help myself, Luke, and I naturally just wanted to be on stage with them.”

It wasn’t until high school, though, things coalesced for him and he knew what he had to do.

“Performance is the only thing that I can do on a day-to-day basis for work and not completely want to lose my mind. Be it acting or singing or dancing is what lights a fire in me.”

After college he found being first generation Filipino-American chasing auditions in New York was a challenge.

“It was very easy to pigeon-hole, especially Asian-American actors, for just a handful of shows. It was like, oh, look I’m auditioning for Miss Saigon again, I’m auditioning for The King and I again, no one ever did Pacific Overtures. I have memories of going into an audition and they would take one look at me and be like, ‘Thank you Mr. Campos for coming out, but we won’t need to, you know, we won’t need to see your material today.’”

Campos left the city, got married, and moved to Georgia just outside Atlanta, and discovered Barter Theatre on a fluke.

“I had a random friend, a mutual friend of my wife and I said ‘hey, I’m going to go audition for the Barter Théâtre, it’s right up the road, it’s about a four hour drive. Do you all want to come?’ I’m like, sure. So, I looked up their season and they were doing the musical Thoroughly Modern Millie. And in my mind I’m going, perfect, there are two Asian roles, Chinese specific, in that play and all of their dialogue is in Cantonese. So, I’m thinking, man, how many Asian actors do they have in southwest Virginia, like honestly? So, I auditioned for the season. I got the job, but not as one of the Asian characters.”

Campos signed a contract with the Barter in 2006 and has never looked back.

The theatre’s producing artistic director Katy Brown says he has become a go-to leading man, and a vital member of a theatre that values diversity.

“We’re looking at whose heart is going to tell the story the best. Sean is such an extraordinary performer, that, you know, oftentimes we are fighting over where we get to put him, you know.”

She says it goes beyond simply casting against type.

“Our theme this year, and it’s a part of Barter’s overall, as well, is common ground. How do we be a place where everybody can come and talk about difficult things, wonderful things? We wanted to make sure we were a space where people could really talk.”

Sean Campos, and the entire company of Barter Theatre, is part of that effort.

“Oh absolutely. I mean, this is home. There’s the stereotype that Appalachian stories, you know, are usually only of someone of white complexion, which is so not true, I mean, I’m an Appalachian boy, I’ve spent the majority of my life living in the South. And Katy’s commitment to wanting to also tell those stories, either Black in Appalachia, Asian in Appalachia that there is this contingency of people that live here that their stories and points of view don’t necessarily get to come out but the fact the steps are being taken and we’re seeing it turn slowly but surely to be able to like incorporate everyone’s stories is great."

Sean Campos takes on his latest role, opening tonight as the overbearing boss Franklin Hart in the musical version of 9 to 5. 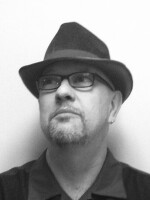 Luke Church
Luke has been affiliated with WVTF for many years, with first contact in 1980 on assignment for the Virginia News Network. From the late 80s to the mid 90s he volunteered for Voice of the Blue Ridge and answered phones during fund drives. He was a station stringer reporter in Charlottesville in the early 00s, contributing to Studio Virginia and later working at the station's Water Street studio.
See stories by Luke Church
A podcast exploring how society confronts sin